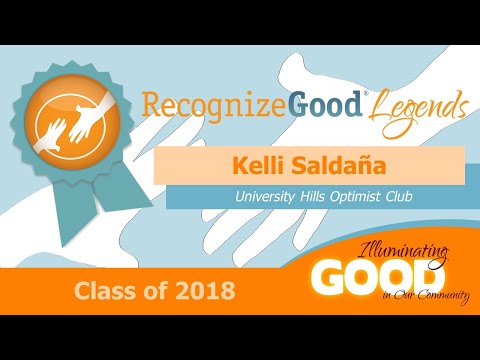 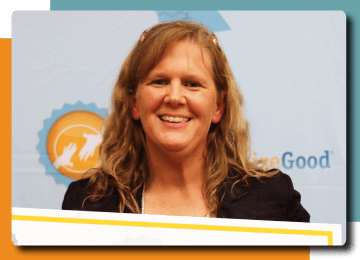 Most of us would have a hard time accomplishing in our day jobs what Kelli Saldaña has achieved as a volunteer! In 2006, Kelli’s daughter joined the Little Miss Kickball (LMK) program sponsored and operated by the University Hills Optimist Club (UHO) in north central Austin. Kelli joined as well, as a team mom. The next year, she became the head coach of her daughter’s team. Following that, she joined the LMK board of directors. Soon after, she became certified as an umpire, and since that time she’s served in virtually every position possible and taken on almost every imaginable duty within the all-girl league from planning a whole tournament to stocking the concession stand. She even came up with a couple of new ideas herself to make the league even better!

Today, Kelli’s daughter has been aged out of the league for four years and yet Kelli herself has not. She’s become invaluable to the University Hills Optimist Club, currently serving as president of the club and treasurer of the Little Miss Kickball program – without slipping one bit. The club has been around since 1966, providing affordable youth sports to tens of thousands of Austin-area kids for over half a century. UHO actually launched Austin’s first-ever youth soccer league! Little Miss Kickball, also the first of its kind in Austin, launched in the mid-1970s and since Kelli joined in has served between two hundred and three hundred youngsters each season. The program stresses the importance of teamwork, hard work and sportsmanship – lessons which each young lady will take with them through their respective lives, and lessons which are exemplified year after year by Kelli. While helping manage the teams of coaches, umpires, parents, and support staff, Kelli also encourages all involved in the program to work together to teach the girls these important life lessons.

Whether fundraising for the kickball all-stars who play in district and state tournaments, acting as the liaison between the club and the City of Austin or even rallying the neighborhood to keep club activities alive and successful, Kelli does it all extraordinarily well. Throughout all the hard work, perhaps the most significant sign of Kelli’s impact lies in the relationships she forms with players and their families. She attends school, church and community functions in which the girls are involved, year-round. The simple act of “being there” has shown beyond shadow of a doubt how much she cares and wants them to succeed – her influence has helped many realize self-worth, discover what they can do for others themselves, and become successful leaders in the community.

On top of all her other duties, Kelli is also president of District IV for Little Miss Kickball regionally, coordinating all the district activities from updating rules and procedures to assisting with umpire training and selecting tournament sites. She’s also been a member of the Austin Women’s Kickball Association executive board for 12 years, helping in every aspect of running an adult rec league for women in the Austin area. Kelli does all of this without being paid one cent, in addition to keeping up with a day job at the University of Texas.