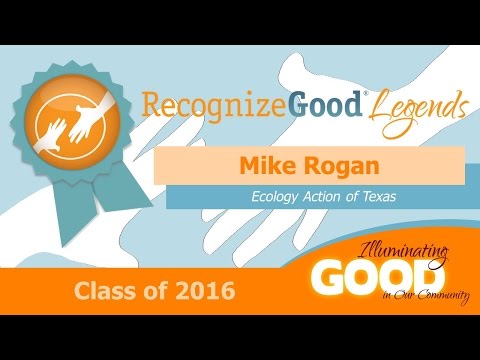 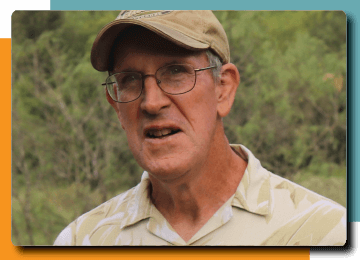 Some volunteers just don’t know how to stop giving. Mike Rogan, longtime volunteer for Ecology Action of Texas, a recycling and environmental education center, is just such a case. When Ecology Action first began formulating a plan to rehabilitate Circle Acres, a former landfill and “brownfield” in Austin’s Montopolis neighborhood, Mike came on board through Travis Audubon to identify the dozens of different bird and other wildlife species on the site. As Mike walked the site each day, he quickly began to drive the development of the entire project – before long he had blazed and designed every walking trail on the site, made detailed improvements to the project’s infrastructure, and identified over 150 species of wildlife. When flash floods created erosion issues on the property, Mike actually built a check dam to redirect creek flow all on his own – literally moving boulders, singlehandedly!

Today, Circle Acres is one of Ecology Action’s biggest successes, home to a 3-acre wetland tract supporting a robust urban forest and bird population. The site is set to open to the public later this year. It’s no surprise that Mike Rogan remains a vital part of the operations, never missing a volunteer event and serving as a volunteer manager leading teams to build trails, work on litter abatement and remove invasive species.

“Mike is a hands-in-the-dirt sort of guy, says Joaquin Mariel, former Executive Director of Ecology Action and current Land Manager at Circle Acres. “He rolls up his sleeves and gets it done. Our organization’s vision since 1969 has been to create a world where landfills are no longer necessary. At Circle Acres, we set out to create a real-life representation of what a remediated landfill might look like – and Mike was essential in helping us create that visionary representation of what our organization has been trying to do for more than 40 years. Mike is more committed to the health of these areas than anybody else I know.”