The Say Thanks, Austin campaign received over 140,000 acts of gratitude this year! All of Central Texas turned its attention and appreciation towards eight inspiring local volunteers for this event.

Carissa Mallory of Reading Around the World Literacy Initiative finished the campaign with the most Thank You votes, and a $10,000 pay-it-forward donation was presented in her name at City Hall on Friday. Emceed by RecognizeGood board members Bobby Jenkins and Earl Maxwell emceed the event once again this year. The group was also treated to a special message from Austin Mayor Steve Adler. This eighth annual Say Thanks, Austin Closing Ceremony reminded us yet again what extraordinary impacts are made by those all around us. RecognizeGood also presented its first-ever Distinguished Legend award to longtime community servant Tino Hernandez.

“For those of you who this is your first time coming to this event, it’s gonna be one of the coolest events I think that you’ll go to,” said Jenkins as he opened the presentation. “The stories that you’ll hear today, and the people that we’ll recognize. The hearts that you’ll see from them – they’re just flat-out inspirational.”

“I think what RecognizeGood and this program do, that most awards programs don’t do is to really look for and recognize the unsung heroes,” Maxwell continued. “The people you’ll be introduced to today … these are not celebrities. They may not make the newspapers, but they do make the news.”

Mayor Adler, who was unable to attend last year’s closing ceremony, told us why he loved the event so much. “I love this event,” said Adler. “I love this concept. We all love this city so much, and we look out for each other at every turn. As committed as everybody is, we need those sparks – those folks that really help show us the way. This is my opportunity, and the community’s to really say thank-you to people who make good things real.”

Say Thanks, Austin is an annual event which presents the Austin area with a unique opportunity to say “thank you.”

Each year, RecognizeGood selects Legend award recipients who become eligible to participate in the Say Thanks, Austin campaign. Over the course of January, the community is able to say Thank You to each participant by voting. There are 6 voting methods including RecognizeGood.org, email, text, hand-written Thank You forms, and social media platforms. The participant with the most votes receives a pay-it-forward donation of $10,000 to the nonprofit organization of their choice. Most importantly, our community focuses attention on those who truly deserve it. We are all inspired to find ways to contribute! 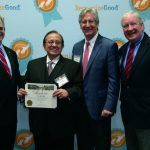 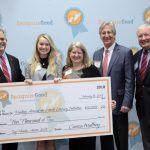 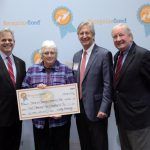 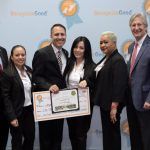