This year’s Say Thanks, Austin campaign winners, Calvin and Carter Miller of Ten At A Time, used a large portion of the $10,000 pay-it-forward donation to buy a fully-trained therapy horse named Shug for Ride On Center for Kids (R.O.C.K.)! It was only three years ago when Calvin and Carter recruited eight friends to start their own giving circle, and seeing them make such thoughtful use of the huge donation they earned is a great inspiration for the future of Central Texas. The boys learned the value of giving back at a young age, and RecognizeGood is proud to have played a part in helping share their story and inspire others! In addition to the therapy horse for R.O.C.K., the boys also decided to donate a brand new espresso machine to the BiG Shop (operated by and supporting Brookwood at Georgetown, led by Lifetime Legend Erin Kiltz) and contribute $1,000 to the The Peyton A. James Memorial Scholarship (part of Georgetown anti-bullying nonprofit Kindness Matters).

R.O.C.K. provides equine-assisted therapies and activities to children, adults and veterans with physical, cognitive and emotional disabilities. Shug, R.O.C.K.’s newest horse donated by Ten At A Time, is a quarter horse born in 2004 and is 14.3 hands tall. Shug may be new to R.O.C.K., but is good enough to already be in classes, going to horse shows and working to improve the independence and life skills of R.O.C.K. clients. Each of the boys got a chance to ride Shug around the R.O.C.K. facility and get a first-hand glimpse of what equine therapy can mean to R.O.C.K. clients.

The original Ten At A Time group has done even more than just use their $10,000 pay-it-forward donation for amazing causes. This group has launched three other Ten At A Time groups in addition to the original Miller Chapter – the Smith Chapter, established in 2016, plus the Sockwell and McMiller Chapters, established in 2017! To date, Ten At A Time has collectively donated over $4,300 to almost 40 different organizations and people in need around the world. By May 2018 those numbers will double to over $8,000 donated to 80 organizations! Kudos! 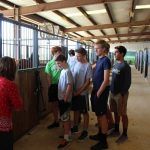 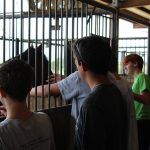 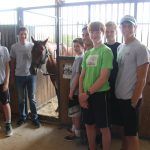 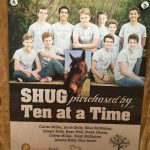 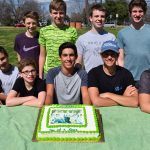 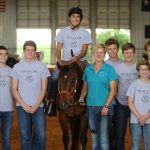 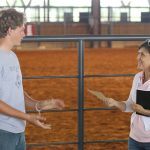 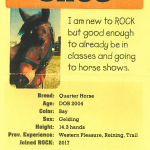