In 2016, RecognizeGood awarded Flo Macklin with our Legend Award for her decade-spanning work with Meals on Wheels Central Texas.  At the time, Flo had made the tough decision to “retire” as a Meals on Wheels diver after spending 42 years delivering meals.  She started volunteering when the agency first opened its doors in 1972, at that time it was called United Action for the Elderly, and not only did she and the other volunteers deliver meals they also cooked them! Over that time, Flo served over 2,700 volunteer hours and delivered over 17,000 meals. As Meals on Wheels Central Texas grew, she gave up her cooking duties and instead focused on delivering meals to South Austin clients every Wednesday.

Flo was also known for her dedication to preserving the history of her neighborhood and was one of six who helped found the Wild Basin Wilderness Preserve. Though gone Flo made a lasting impression on Austin, Texas, and stands as a great motivation to give back to our community. 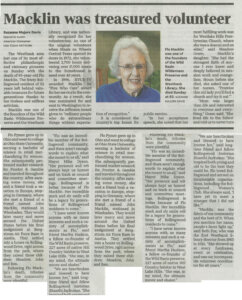 Please visit the Austin American Statesman for their complete story on Flo Macklin.