Before either Calvin or Carter Miller hit 15 years old, they joined with 8 of their friends to launch Ten at a Time,  the giving circle that’s changing lives around the world ten dollars at a time.

Calvin and Carter Miller learned the value of giving back at a young age. Once they decided to find their own way to do something good together in 2014 their impact grew exponentially. After talking through their idea with their parents, the boys recruited eight friends to start a giving circle. Each member donates $10 of their allowances or birthday money each month. Additionally, the group takes turns deciding where the group’s pooled donation should go. They decided to call their organization Ten at a Time. As of this release, the boys have donated $1,700 to 17 different causes!

During their first year of giving, most of the boys used personal experience when deciding where to direct each donation. A family member in the military led to support for military care package program Operation Gratitude.  An up-close disaster relief volunteer experience prompted a contribution to Samaritan’s Purse. Finally, a family member born with a cleft pallet inspired a donation to Operation Smile. Since then local nonprofits like The Locker and R.O.C.K. also benefited from the boys’ philanthropy.

Once the money is donated, the member responsible for that month’s decision leads the next meeting. They are able to share with the group the good their donation has done. “I feel that my money is making a difference to others who need it,” says Carter. “I like the way we do it because I feel like I’m doing good at every meeting, every month!” Calvin agrees. “Even though I’m not the one who gives away our pool of $100 each month,” he says, “I still feel good about it because I put my own money into the donation. So every month I know I’ve contributed to good in the world.”

As 2016 Legends, Calvin and Carter are now eligible to participate in RecognizeGood’s Say Thanks Austin campaign, an annual event which presents Central Texas with a unique opportunity to say “thank you” to a group of remarkable individuals who contribute their time and talents to our community. The participant with the most Thank You votes receives a pay-it-forward donation of $10,000 to the nonprofit of their choice.

View Calvin and Carter’s official Legend page, including video and photos from their presentation ceremony. 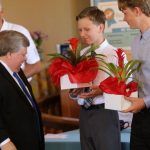 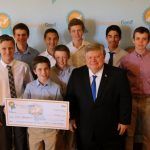 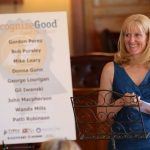 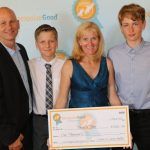