In an exciting expansion to the ongoing partnership between KEYE-TV and RecognizeGood, newscasts are now featuring regular “Pay It Forward” segments. Legend award recipients, Lighthouse award recipients and others now have the opportunity for their stories to be shared with tens of thousands of Central Texas viewers. While RecognizeGood itself will never be the focus of these news stories, our goal has always been to illuminate the good in our community – thanks to KEYE, that illumination is getting a whole lot brighter!

KEYE has been a great supporter of RecognizeGood since its beginning, and has generously donated coverage for the last few years. The opportunity of a news feature, though, is a first. As the story goes, last year each station anchor was given the opportunity to produce segments for a theme or a cause near and dear to their hearts. Anchor Hema Mullur, a UT graduate who joined KEYE in 2014, chose to focus on the idea of “paying it forward” – her colleagues filled her in on the inspiring volunteer stories RecognizeGood shares, and the rest was history!

“Great people are the foundation of what makes Central Texas the place we love!” Hema tells us. “KEYE-TV’s partnership with RecognizeGood allows a broader audience to see the amazing things people in our community are doing to help one another. The response to every story is positive and heartwarming, and is an inspiration to others as they find ways that they too can pay it forward.”

As of this publication date, these friends of RecognizeGood have been featured: Karen Crosby (The Locker), Gil Iwanski (Minis and Friends), Alan Graham (Mobile Loaves and Fishes), Tino Hernandez (Just Because Christmas), Rudy Uriegas (Sacred Heart Community Clinic), Erin Kiltz (Brookwood in Georgetown) and Steve Barclay (Blood and Tissue Center). “Pay It Forward” is now a hit, even reaching outside of RecognizeGood and featuring several other inspiring stories of selflessness. Isn’t that what recognizing good is all about? 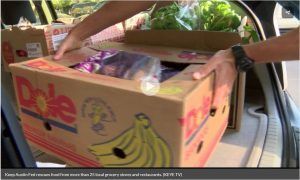