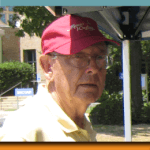 Distinguished Legend Award winner Jim Scott has volunteered countless hours with Mobility Worldwide Austin, donating his priceless woodworking and operational talent for over 11 years to every single one of the hundreds of life-changing mobility carts built in Austin.

After retirement, Jim and his wife Betty dedicated their lives to mission work through their church. The Scotts went on no less than 19 mission trips of at least a week, both abroad and in the United States, but as the couple aged into their eighties they knew they would have to eventually put their own health above the critical work they were involved in. Around that time, they became involved in a new organization delivering life-changing mobility to those all over the world without the use of their legs – then known as Personal Energy Transportation and since rebranded as Mobility Worldwide Austin. The Scotts both felt as if God was letting them stay involved with mission work through this organization.

Jim and Betty both got involved immediately, as he began working from his garage and she served as the organizations’s first secretary. Not only did Jim cut the wood necessary for each cart and assemble each cart chassis, but he served on the board of directors and lent his considerable expertise in organization and operations, going so far as to lay out each workshop himself for the best work flow and efficient use of space. A master jig designer, volunteers at Mobility Worldwide affiliates all over the country enjoyed increased efficiency and quality because of his “inventions.”

“I don’t know how many hours Jim puts in,” admits Mobility Worldwide Austin president John Rudd, “but I would guess it is close to a full time job for most folks. The one thing I can say with confidence is Jim has touched the wood on all of the nearly 900 PET carts that have been built in Austin.”

“He is a quiet leader,” says longtime volunteer Jim White. “He never gets rattled, and always enjoys the respect and admiration of all that work with him. No one deserves recognition more than Jim, for the sheer commitment he made to PET. He contributed in so many ways – I would bet my last nickel that he built more carts than anyone in Austin, and there is a good chance more than anyone anywhere! Jim Scott is a role model of a good Christian man, and it has been my honor to have known and worked with him.”

“You’re really getting more bang for your buck with [this] than with almost any other mission,” says Jim Scott himself. “For about three hundred dollars, you can built a cart. You do so little, but you change someone’s life. You GIVE them life!”