Archer Hadley’s name came into my inbox a few months ago when I had just started working under RecognizeGood. He was nominated to be one of our Legends, where we highlight individuals who go above and beyond in the community. Archer’s Challenge sets out to break down the physical and psychological barriers of a day in the life of someone in a wheelchair by spending a day in one yourself. He’s been able to use the money he’s raised to give back to the community and not just ensure buildings are ADA-compliant, but that someone in a chair can get around just as easily as anyone else.

“You can tell right away he’s a special person,” Archer’s friend and former physical therapist Conner Lytle states. “Passionate is the first word I think of for Archer. He’s a die-hard Longhorn fan – it’s fun to watch games with him. He’ll scream and yell at every play and he takes that same passion into every Challenge. He doesn’t go for small goals, he wants to do his best at everything he does.”

With an organization as different and impactful as Archer’s Challenge, we couldn’t and wouldn’t let his amazing work for AISD, Alamo Drafthouse, and so many others go by without us spotlighting it. Archer’s Challenge is different than many other nonprofits because it actually allows you to participate and understand a day in the life of those who you are looking to help. You get to see firsthand that wheelchair ramps or automated doors do not mean that simple tasks come easy or that people will treat you normally.

“Archer’s Challenge really isn’t about me or anything that my team has done,” says Archer himself. “It’s about the experience that you have when you sit in that chair and realize that somebody is walking by you, but they didn’t say hi to you because you’re lower than them and they don’t see you.”

This ability to experience a new perspective has taken what was first created as a way for Archer to purchase automatic doors for his high school into something much bigger than he could have ever imagined. Archer first began his challenge after a rainy day at his high school. He couldn’t locate his aid that typically helped him get from class to class and was unable to open a manual door, leaving him outside in the cold. His frustration in not being able to be independent sparked his plan to raise money to fund the new doors himself. Teachers and staff were “challenged” to spend a day in a wheelchair and see the school from Archer’s perspective. He surpassed his fundraising goal allowing him to work on more campus projects and was asked to come to 7 other schools and run the same Challenge there. “I wanted to create a unique experience for everyone to understand what it’s like to be somebody like me and what people like me go through,” Archer explains.

We finally got to meet Archer in real life during his UT Challenge and I couldn’t have been more excited. It was a cooler Wednesday morning on campus and we were able to instantly find his booth due to the swarm of students and staff in the area. 111 wheelchairs were lined up, ready for the next participant to be fitted and given the rundown on what to expect during their day on campus on wheels. “Most people who do it each year have never sat in a wheelchair before, and it’s always interesting to hear them talk about how difficult it was and the surprises they didn’t expect,” Lytle remarked.

We patiently waited to meet the man of the day and could not have been more impressed. Archer is an inspiring person to be around, making everyone around him laugh. He was incredibly positive and we were told he’s always been that way. Archer was born prematurely and spent several of the first few months of his life in an intensive care unit. He was diagnosed with cerebral palsy and later on given his first wheelchair, but he’s always pushed to be independent. “Admittedly, I was in complete denial,” his mother told us. “I said no, no, no, not my kid – until he was about 6 I dragged him around in a wagon and took him to school and made the teachers pull him around in a wagon. Finally, in first grade, I had to break down and just say the wagon isn’t cutting it anymore and he’s got to get a wheelchair. Once I got myself out of my own way – or out of his way – it was a good thing for him.”

Archer is now in his senior year at the University of Texas. He’s been running Challenges for over 5 years and is most proud of two particular moments. One was creating instant impact after meeting with Alamo Drafthouse owner Tim Lee, who participated in one of Archer’s Challenges and immediately made changes in all of their locations to help accessibility problems he discovered while in his wheelchair. Second, Archer was able to help a disabled survivor of Hurricane Harvey who lost everything. “Their home was destroyed,” Archer reflected. “The kid’s equipment got ruined, they didn’t have a place to live. We decided to help them find new housing and pay for it for half a year – we also got them new equipment and it was a really, really great experience to be able to be the rescuer of a person that was affected by something so horrible. When you have a child with a disability like they did, it is much more work to rebuild an entire life and everything you worked for. To be able to assist them in that process was a real honor.”

If there’s one thing that everyone can agree on, it’s the impact Archer has had on Austin. Allowing so many people to reshape their perspective and to take the time to stop and notice that while we may be doing something to help, we can always do more than the bare minimum. Archer has opened the eyes to so many, but there is still a lot of change to come. When speaking with his mother, she posed a question that stuck with me.

“If you wanted to have Archer over for dinner tomorrow, would he be able to?”

I paused, knowing he would not. My tiny, one-bedroom apartment has only stairs leading up to its door, my clutter of shoes and clothes thrown across the floor would clearly be an obstacle (one I should probably get on), and my kitchen table would be too high for him to eat comfortably at. Little nuances we don’t think about affect people like him most.

Everyone involved with the Challenge, participant or volunteer was amazing to meet and it was all due to the light that Archer gives back. The cause is fun, light-hearted in spirit, but truly captures a reality most people would only experience due to extreme life circumstances. Archer was a man in high demand, attracting many students, others wanting to interview him, and even the Athletic Director at UT. Archer even stated that other states had contacted him, wanting him to put on the challenges for their city! While his future may be unclear post-college, I know we can expect big things.

On what’s to come, Archer left us with these words: “I have other things in my life I want to achieve. I’m trying to become an architectural designer and I want to work on accessible spaces. The roadmap to the future is not a very clear one, but with the momentum we have I think we can do nothing but go upwards!”

To learn more about Archer and his upcoming challenges, click here.

Filmed and Photographed by: Patrick Newman and Morgan Humburg 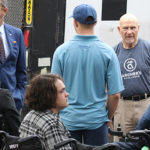 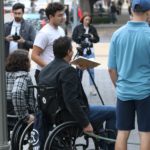 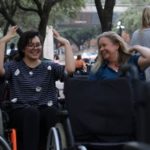 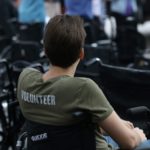