After witnessing firsthand the disturbing conditions of Maasai children in Tanzania, Donna Gunn launched Africa’s Promise Village and is taking it upon herself to turn their lives around.  View Donna’s official Legend page, including video and photos from her presentation ceremony.

Donna first visited Tanzania on safari in 2010 and was staggered by the deplorable conditions, widespread malnutrition, and utter lack of education she found in the tiny villages of the Maasai tribe. Donna was especially moved by the children she met. She promised to dedicate the rest of her life to helping these children and their communities. Her nonprofit Africa’s Promise Village (APV) provided the Maasai people with everything from food and water to prosthetic limbs. And Donna shows no signs of slowing down. APV works with many schools and orphanages in Tanzania, including the Intel School and Arusha Primary School. Both schools are located in Arusha about 40 miles west of the famous Mount Kilimanjaro.

From collecting clothes, medicine and school supplies to finding sponsors for more than 20 orphans, she continues to find new and creative ways to support the children in Arusha.

Futhermore Donna, a member of Lakeway Rotary Club, also secured a grant from Rotary International. This grant allowed for them to drill a series of wells to bring clean water to over 37,000 Maasai people. Now in her 70s, she organizes and leads two trips each year to the most remote parts of Tanzania. She brings groups of volunteers that range in age from 20 years old to 80 on these trips. Additionally, roughly one ton (2000 lbs) of supplies makes the journey. “I think a lot of people dream that ‘one day’ they would like to go to Africa and work in an orphanage,” said Karina Duque. “Donna makes that one day TODAY!”

As a 2015 Legend, Donna is now eligible to participate in RecognizeGood’s Say Thanks Austin campaign.

This annual event presents the Austin area with the opportunity to say “thank you” to a group of remarkable individuals. The participant with the most Thank You votes receives a pay-it-forward donation of $10,000 to the nonprofit of their choice. 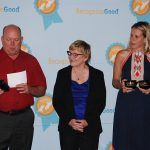 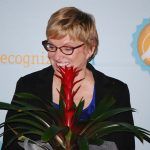 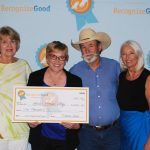 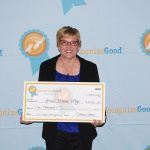