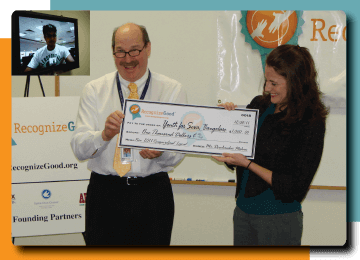 Devchandar Mohan, the RecognizeGood® Legend for November 2011, became the first international Legend award recipient. Mohan, a group research and development manager for National Instruments India, is also an integral part of NI India Cares, an employee-driven initiative that aims to reach out to underprivileged children in the community.

To improve the quality of life and education for orphaned children in India, NI India Cares supports five childcare homes and a free medical clinic via the generous contributions of 50 percent of its employee participants. “NI India Cares goes that extra mile beyond merely providing monetary assistance to deserving students,” said Mohan. “It also gives us the opportunity to meet, interact and mentor the children from homes that we support, which leaves a far more lasting influence, bonding, and sense of belonging for both the volunteer and the child.”

Mohan will soon assume ownership of the WeDo Robotics campaign, which aims to educate and inspire children in the fields of science, technology, engineering and math. He gave his $1,000 Pay-It-Forward donation to Youth for Seva, a program through which he recently developed an ophthalmological facility. Formed in 2007, Youth of Seva is an organization intended to inspire youth to volunteer, connect them to grass roots projects, and provide ongoing support and training for its volunteers. The ceremony to recognize Mohan was unique in that it took place in two locations simultaneously. Mohan was presented with his award at 8 a.m. in Austin, which was 6 p.m. in India. National Instruments community relations manager Amanda Webster spoke at the event. TyRex Group CEO Andrew Cooper presented the award.

“National Instruments would like to say thanks in general to all those involved in NI India Cares, and specifically to Dev who has put in so much time and effort into improving the lives of underprivileged children in India,” said Traci Clayton, National Instruments representative and the one who initially recognized Mohan on RecognizeGood®’s website. “It’s because of people like Dev that we can look forward to a brighter tomorrow.”