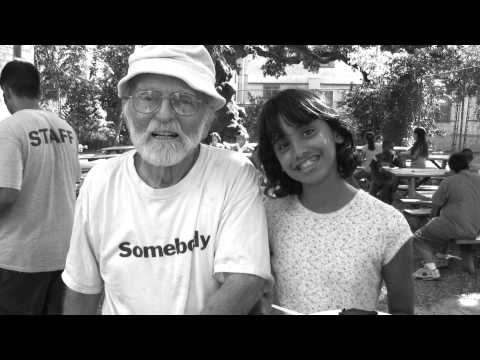 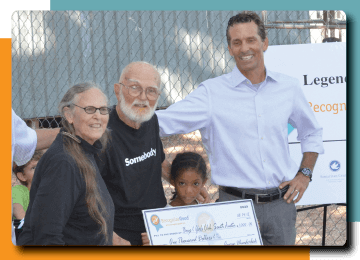 “A legend is someone who does heroic things,” said one small girl on a muggy August morning. On Tuesday the 14th, children and adults alike gathered at the Boys & Girls Club in South Austin to recognize one man for his dedication to teaching children the sport of tennis, and more importantly to being a hero and mentor for impressionable young minds. On a daily basis, George Wunderlick demonstrates how sport can be integral to the development of productive, community-minded young citizens. In every sense of the word, George is a hero for his unending quest to brighten the lives and minds of Austin’s youngest citizens.

George began his work with the Boys & Girls Club in 1999, when he asked if he could teach the game of tennis. He built his foundation on the principles of teaching etiquette, sportsmanship, and a lifelong love for the game. Through his time with the program, now called Tennis, EVERYONE, George has instructed approximately 1000 children in the development of their tennis skills. More importantly, he has cultivated lifelong bonds with those children, who have seen through his example just what it means to play an active role within a community. At the ceremony, friends and colleagues spoke highly of George’s work with the club members. “George is a Great Grandfather in the greatest sense to thousands of kids here at the Boys & Girls Club…If you play a tennis match with George, the game doesn’t exist until you shake the hand of your opponent,” said Mr. Brian Beaulieu, Director of Operations, Boys & Girls Clubs of Austin. He accredits George with creating “great tennis players, great sportsmen, and great citizens.”

In 2011 George turned 89 years old. A hip replacement and an ongoing battle with lung cancer have slowed his steps, but not his spirit. He helped run the tennis program at the South Boys & Girls Club nearly every Thursday for more than 13 years. In addition to tennis, teaching rules and shaking hands, George teaches the kids about eating healthy.A few years ago he started the Garden Club. Club members planted and tended a cherry tomato crop, then proudly harvested and ate them by the handfuls. The value of George’s efforts at the Boys & Girls Clubs in Austin cannot be overstated. Thousands of kids have been introduced to a game they otherwise might never have played. Every kid has an adopted grandfather.

George was the recipient of a $1000 Pay-It-Forward check, an amount matched by an unnamed board member of the Boys & Girls Club. George promptly donated the money to the club in order to help them continue with important programs like Tennis, EVERYONE. The presenter, Mr. Michael Carter, Director of Community Development for the United Tennis Association, echoed George’s sentiments when he declared that tennis is “a sport for a lifetime and a sport for everybody.”