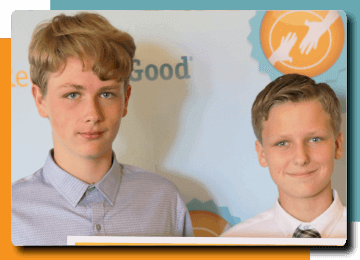 Before either Calvin or Carter Miller hit 15 years old, they joined with 8 of their friends to launch Ten at a Time, the giving circle that’s changing lives around the world ten dollars at a time. 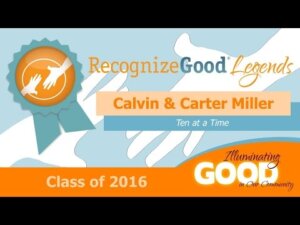 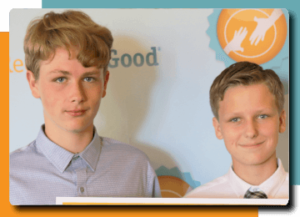 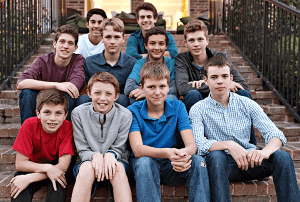 Ten at a Time

Update: As of December 2016, Ten at a Time has now given away $2,700 in allowance, birthday money and earnings from small jobs.  Even better, this amazing group has added a second chapter – so there are now 20 Ten at a Time boys doing good in the world each month.

Calvin and Carter Miller learned the value of giving back at a young age, and once they decided to find their own way to do something good together in 2014 their impact has grown exponentially. After talking through their idea with their parents, the boys recruited eight friends to start a giving circle in which each member would donate $10 of their allowances or birthday money and take turns deciding where the group’s pooled $100 donation should go. They decided to call their organization Ten at a Time. After one round of giving, the ten boys have donated $1,000 of their own money to worthy causes around the world.  As of December 2016, the boys collective total donation has now grown to $2,700 distributed to 26 different nonprofit organizations around the world.

During their first year of giving, most of the boys draw from personal experience when deciding where each collective donation should be directed – a family member in the military led to support for military care package program Operation Gratitude, an up-close disaster relief volunteer experience prompted a contribution to Samaritan’s Purse, and a family member born with a cleft pallet inspired a donation to Operation Smile. Since then local nonprofits like The Locker and R.O.C.K. have benefited from the boys’ philanthropy. Once the money has been donated, the member responsible for that month’s decision leads the next meeting and tells the group about the good their donation has done. Ten at a Time has also supported rescued horses, rainforest protection, and children around the world who are orphaned or fighting malnutrition, hunger or lack of clean drinking water.

Calvin and Carter are 15 and 12 years old, respectively, and they helped shape their giving circle’s initial framework and rules – but from the very beginning, sharing control of the group among all 10 members was a priority for them both. Perspectives vary amongst the group, which range in ages from 10 to 15 and collectively span five different schools in Round Rock and Georgetown. Keeping the organization in the hands of its members also means parents can’t contribute to the weekly donation or lead meetings. “I facilitated the first meeting to get them started and I was amazed at how every single one of the boys were completely engaged and participatory,” admits Calvin and Carter’s mother Erin. “They struck a nice balance between being serious but also light-hearted and fun about this new adventure. They had impressive points of view – things I hadn’t thought of. They were respectful of each other as they listened to other’s comments and built off each other’s ideas – but also goofed around as boys do!”

The boys’ father, Ron, made it a goal to teach his sons about the value of giving back from an early age. Ron grew up very poor in what many would call the projects of lower east side Manhattan. He started hanging around The Boys’ Club of New York (BCNY) for meals, organized sports and to socialize with other boys in a safe environment. At 12, the BCNY plucked Ron out of the projects and financially supported his prep school, undergraduate degree and even his MBA – Calvin and Carter understand that their dad’s success in life was supported by others’ selfless giving, and the importance of paying that forward. The family volunteers together regularly, and the boys have fostered over 60 kittens through the Georgetown Animal Shelter. Ten at a Time is not a school project, and none of the boys receive anything in return except the sense of pride that comes along with giving something selflessly to those in need. Yet for these boys, that seems to be enough. “I feel that my money is making a difference to others who need it,” says Carter. “I like the way we do it because I feel like I’m doing good at every meeting, every month!”

Calvin agrees. “Even though I’m not the one who gives away our pool of $100 each month,” he says, “I still feel good about it because I put my own money into the donation. So every month I know I’ve contributed to good in the world.”