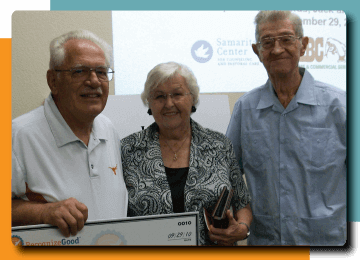 Six times each week for more than 15 years, Jack has picked up day-old bread from Randall’s and delivered it to local food banks and soup kitchens. Despite battling lymphoma, Jack continued to make his deliveries and recruited Janelle to join him. 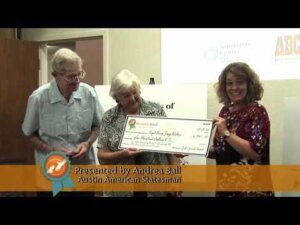 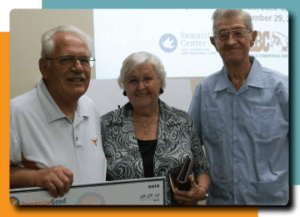 ack Hadsell, 85, has been volunteering since he retired from teaching 30 years ago. He started out throwing small parties at various rest homes where he served drinks and cookies and led the members in singing old songs. He did that for many years until one day he started helping a man pick up day-old bread from Randall’s and deliver it to various food banks and soup kitchens. The man he was helping became sick, so he turned it over to Jack.Since then, Jack has been making daily deliveries for more than15 years. The pick-ups and deliveries are no small errand. Jack was getting up at 5a.m. six days a week to make his rounds until he found out he had lymphoma. The doctors told him to give up the “job”, but he could only stay away for a few weeks. Though his daughters persuaded him to start at 7a.m., Jack works each morning no matter how bad he feels.When he began having dizzy spells, he talked his wife Janelle into going with him so he could keep up the work. She now joins him in the car every morning and sorts the bread when he brings it out. Janelle also enjoys sharing a little bread with the birds at each stop, earning a nickname of “the bird woman.” The birds now recognize the Hadsells, flocking to the car, waiting for breakfast. Jack and Janelle also find time to volunteer at First Methodist. Jack helps feed the homeless twice a week, making sure they get a little something extra like cake, cookies or cheese. Meanwhile, Janelle cleans the sanctuary at First Methodist once a week. At age 85 and 83, Jack and Janelle continue to live a life of community service and volunteerism, sharing their time and enthusiasm with Austin’s neediest citizens.

In WWII Jack served in the Army Air Corp and received the Purple Heart. After graduation from North Texas, Jack then taught 30 years for AISD. Upon retiring he began volunteering. In recognition of his many hours of service, he was awarded both the “Five Who Care” award and the “RecognizeGood Legend” award. He was also inducted into the Austin High Hall of Honor.