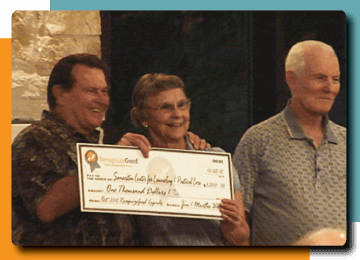 Both together and independently, Jim and Martha have been extensively involved in the community for over 30 years – both very active in Habitat for Humanity, both long-time supporters of Smile Train, and Martha has been a devoted volunteer of the Settlement House for Children for 25 years. 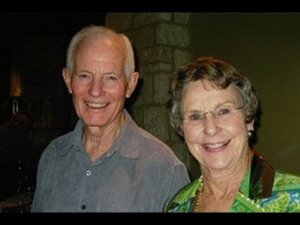 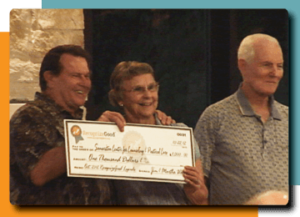 In October, RecognizeGood was proud to honor the final Legends of 2012. Jim and Martha Wallace are a special couple whose work within the Austin community and around the world should inspire us all. On a beautiful October evening at the Barton Creek Golf Country Club, participants of The Samaritan Center’s 2012 Minister’s Cup Golf Classic took time out from their celebration and fellowship to join us in recognizing the work of this extraordinary duo.

Nancy Blaich, the Wallace’s nominator and CEO of the Samaritan Center, said of the couple, “James and Martha have led a life of service we should all strive to emulate. They have been extensively involved in the community for over 30 years.” The couple has been involved in countless charities over the last three decades, and have worked diligently to serve their community both together and independently. Jim, whose community service extends from his personal to professional life, has served as a Texas Senator, a District Court Judge and was eventually elected to the Texas Supreme Court in 1981. Together, Jim and Martha have been very active in Habitat for Humanity and have worked on over a dozen new homes. Their long-time support for Smile Train, has helped provide surgery for children with cleft palates around the world. Martha has been a devoted volunteer of the Settlement House for Children for 25 years.

The 14th Annual Minister’s Cup Golf Tournament was dedicated to Jim & Martha Wallace and we are proud to have been welcomed to honor them as RecognizeGood Legends at the golf tournament dinner.

The Minister’s Cup encourages Congregations and Organizations to join in fellowship with other members of Austin’s faith based community, and enjoy a friendly golf tournament supporting a worthy cause. Proceeds from the event helped to support the Samaritan Center.

Don Ames, co-owner of Ames & Weinheimer Wealth Management, and himself a RecognizeGood Legend, presented the Wallace’s with a Pay-It-Forward check of $1,000 which they promptly donated to the Samaritan Center. In addition to funds raised through the Minister’s Cup, their donation will go to support the Samaritan Center’s ministry to provide professional, affordable, faith-sensitive counseling services. Accepting the award with grace and humor, Martha said, “I’m certainly not deserving of all this attention, but I’ll take it.” Following the ceremony, Nancy Blaich said, “There are a lot of adults, children and veterans that will benefit from this donation.”