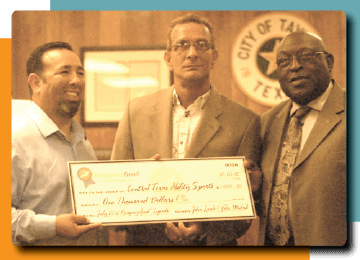 John and Felix saw firsthand the impact sports could make on children with disabilities, and started Central Texas Ability Sports to make sure every kid had a chance to play. 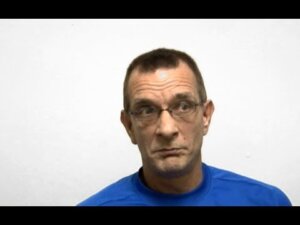 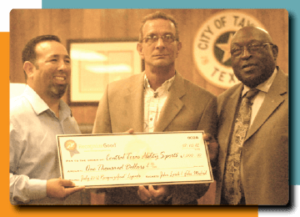 This summer we had the opportunity to recognize two men, John Lorek and Felix Madrid. They were acknowledged as our July 2012 RecognizeGood Legends and honored with a “Pay-It-Forward” donation of $1,000 to Central Texas Ability Sports. The ceremony took place at City Hall, in Taylor, Texas. John Lorek and Felix Madrid started the non-profit organization East Wilco Challenger Sports in Hutto, Texas. The mission of this nonprofit organization is to have all interested children with special needs in Eastern Williamson county, Travis county, and Eastern Central Texas play sports all year round, free of charge. This organization was inspired by Lorek’s son, Ryne. Ryne lives with visual and muscular disabilities; however, the elder Lorek believed that Ryne deserved a chance to run, and play, and jump like other children. The nonprofit organization is partnering with the Cal Ripken Sr. Foundation and applying for grants and raising money to build their own Special Needs Ability Baseball Field for 2013! They are also going to use their $1,000 Pay-It-Forward donation to pay for new kickball jerseys.

Doug Austin, a special education teacher and certified Special Olympics coach, was honored with the privilege of speaking about John and Felix. The stories he told about the organization, from its infancy to present, were moving. Of John and Felix he said, “It was an honor to recognize these two gentlemen, who have a unique idea that is benefiting a lot of the kids in the central Texas area. John and Felix recognized a need that is out there. They saw a problem, and instead of saying ‘what can you do for me,’ they said ‘what can we do?’” As Doug told the story, he inspired a beautiful picture of what it was like to be a part of the organization’s history. “In the fall came kickball, Friday night, under the lights. We could no longer stand by and watch, we had to play…” and he continued on about their basketball program too, “There are college athletes, high school athletes, grandparents, and the rest of the family shooting hoops together. This league is not just for youth with disabilities, this league encourages everyone to participate. Why is this important? Students who have difficulty with social interaction are now hoopsters with total strangers and enjoying it! It is something the students look forward to, and talk about on the weekends. Saturday is for hoops – they have found norm.”

The Central Texas Ability Sports is a very special organization. This group is a phenomenal sports league in which the athletes have something in common; the diagnosis of a disability. For these kids, John and Felix emphasize on creating a new “norm,” an environment in which children with disabilities can centralize on what they can do, and have fun experiencing what every child deserves to enjoy. Their motto is teaching life skills through sports. “We’re teaching the children inclusion, sportsmanship, honesty, integrity, and it’s carried over to their classrooms and their lives,” John said. They have even inspired college students to major in special education. “The kids are so wonderful.” Felix said. “They make you smile every time you’re out there. Our history books are always evolving, because each time we go out there with the kids, with the family, there is a new story being told.” It was a privilege to recognize the positive impact John and Felix have had on so many lives. They have a huge heart for kids, and are making an incredible difference for the greater good.

John & Felix will also be a part of our upcoming “Say Thanks” Austin annual event, in which they will be presented along with our other 2012 Legends. The “Say Thanks” Austin event allows the community to say thanks, by voting for the Legend if their choosing. The Legend with the most Thank-Yous receives a $10,000 Pay-It-Forward to the nonprofit of their choice. The goal is to gain as much participation from the community as possible and to continue the “Circle of Good.”