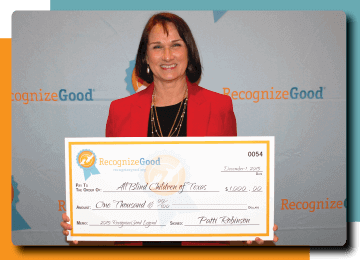 Patti makes a profound impact on the lives of blind and visually impaired students by using volunteerism and a first-of-its-kind LEO club to connect them to their community for life. 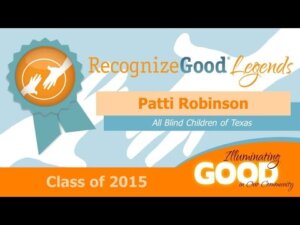 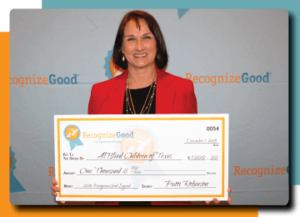 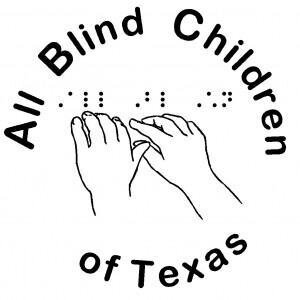 All Blind Children of Texas

When Patti Robinson first started serving others as a Girl Scout Brownie in the second grade, she couldn’t have known what an impact she’d make on others over the course of her life. She couldn’t have guessed where her life was headed as she advanced to become an official Girl Scout a few years later, or when she began visiting nursing homes and ushering for her community with the International Order of the Rainbow for Girls. As she graduated high school a semester early and joined Amigos de las Americas, administering over 150 measles vaccinations to the underprivileged in Columbia, she couldn’t have predicted all the different ways she’d contribute to her local community. For Patti, serving others has simply always been a part of her life, and she’s passed that spirit of community service on to a new generation in a special way.

Soon after graduating from the University of Texas, Patti applied for a job at the Texas School for the Blind and Visually Impaired (TSBVI). She’s recently celebrated her 35th year working for TSBVI, but over the course of those years Patti’s made her biggest impact on the lives of TSBVI students by connecting them to the community around them. Her first attempt was through Scouts and now, as a member of the Austin Downtown Founder Lions Club she has formed a LEO Club, the first of its kind, at TSBVI, for students who are visually impaired. LEO stands for: Leadership, Experience and Opportunity.  Clubs are sponsored by area Lions Clubs and give the youth of the world an opportunity to learn about being responsible members of their communities by serving. Patti realized early on that this idea would have a unique effect on the blind and visually impaired students who struggle mightily to connect with the world around them. TSBVI students are largely from other parts of the state and typically only attend the school for a period of their education before returning to their home communities – by finding ways for students to serve and contribute to the community around them, Patti’s been able to forge a meaningful, lifelong connection between those students and the Lions Clubs in their home communities through the common goal of service to others in Texas and around the globe.

TSBVI School Collaboration Specialist Virginia Hemstreet has seen the impact made by Patti’s efforts extend beyond students’ time at the school. “She’s helping these students form connections here that will last when they return to their home communities. She really goes above and beyond – she’s the kind of person I love to brag about!” Gloria Bennett of All Blind Children of Texas adds, “Patti trains these students to become a part of the community – something blind people really don’t have an impetus to do, because it takes a connection. She gives that connection to them for life.”

Beyond her LEO Club, Patti’s involvement in the community seems endless. She’s a member of the Inter-Governmental Training Council, National Safety Council, and Texas Distance Education, and volunteers as a CPR trainer for the American Heart Association. She’s served on the board at Prevent Blindness Texas. She’s hosted dozens of international students in her home for weeks at a time through the Julien C. Hyer Lions Texas Camp. She’s made monthly Meals on Wheels deliveries for the past 10 years. Patti’s also a past president of the Austin Downtown Founder Lions Club, and club member since 1997. “I’ve never seen anyone work harder,” Gloria says. “She’s the best advocate I know!”