A packed house of over 650 joined together at the AT&T Executive Education and Conference Center for the 16th annual Ethics in Business & Community Awards, recognizing outstanding ethical business practices and celebrating the idea that doing good is good business in Central Texas. RecognizeGood honored award recipients in five categories, followed by the presentation of the Anita & Earl Maxwell Lifetime Achievement Award. The theme of the awards program is encouraging the partnership between business and community in order to make Central Texas stronger.

Award recipients were announced as follows: 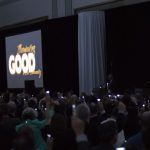 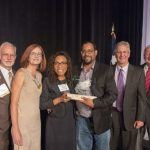 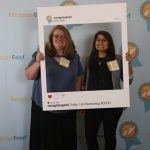 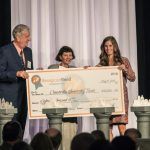 Nominations are made by the community online at RecognizeGood.org, then vetted by business students at Concordia University before being trimmed to three finalists in each category and presented to a selection committee of distinguished Leadership Austin alumni. Dr. Lynette Gillis, Dean of the College of Business at Concordia University Texas leads the program for Concordia along with adjunct professor Dr. Jack Allen of Dynamic Coaching, LLC. Proceeds from this event benefit the Samaritan Center, who presented the Ethics in Business Awards until the program’s adoption by RecognizeGood in 2011.

While accepting the Small Business award, Robert Phipps of Per Stirling Capital Management commented on the experience. “To even be nominated for this award is a humbling and extraordinary honor. To have won this award is clearly the high point in the history of our company.”

Tyson Tuttle of Silicon Labs reminded the crowd of the focus of the program, encouraging the partnership between business and community in order to make Central Texas stronger. “Really, in the end, it’s about leaving the world a better place than when we found it,” Tyson said, while presenting the Large Business Award.

“This is a recognition of you and your trust in us,” Ann-Marie Price of Baylor Scott & White Health told the crowd. “We’re very happy to be a larger part of the presence here in Central Texas and thank you so much for your trust in us.”

Finalists for this year’s awards included A+ Federal Credit Union and Texas Mutual Insurance in the Large Business category, Embree Group of Companies and R Bank Texas in the Mid-size Business category, Corvalent Corporation and STRÜB Residential in the Small Business category, Footprints Children’s Grief Ministry and Strider Safety Operations in the Nonprofit category, and Misti Potter and Steve Stapp in the Individual category.

We would love to have you as a sponsor for the 2019 Ethics in Business & Community Awards Event, held on May 23, 2019 at the AT&T Conference Center! Consider sponsoring and help us continue this worthwhile community event. Please contact us to find out more about sponsorship opportunities!