RecognizeGood honored Bill Miller of Drive A Senior with the 61st RecognizeGood® Legend award in a presentation at Tarrytown United Methodist Church (2601 Exposition Blvd, Austin, TX 78703), beginning at 2:00 pm on Wednesday, November 2nd, 2016.  During this event, RecognizeGood made a $1,000 pay-it-forward donation to Drive A Senior in Bill’s name.

Willie Nelson’s famous “On The Road Again” might be a fitting theme song for Drive A Senior volunteer Bill Miller. Since he began volunteering with the organization in 2007, Bill has provided over 760 drives to Central Texas seniors. These range from doctor appointments to grocery shopping. That translates to an estimated 17,000 miles of volunteer driving! Retired from the U.S. Air Force, Bill is as an extraordinarily devoted and dependable volunteer driver.

Drive A Senior was launched in 1985 to fill in the gaps left for non-driving seniors when family members, public transportation or taxi services proved unreliable or expensive. Today the nonprofit provides services to more than 20,000 Central Texas seniors.

Bill has taken the group’s mission and made it into a reality for countless Austin-area seniors who want to continue to live active and healthy lifestyles. It’s not unusual for Bill to drive four times a week, often driving more than once per day. During his drives and other volunteer ‘duties’, Bill has encountered many clients who need extra care. For example, one-hour appointments that last for four or five. Reassuring clients who are anxious about a doctor appointment. Or any other form of intangible assistance that a client may need. He also drives veterans in need of medical care to and from the Veterans Administration clinic in Temple once a day, which he’s done since 2007.

As a 2016 Legend, Bill is now eligible to participate in RecognizeGood’s Say Thanks Austin campaign. This annual event presents Central Texas with a unique opportunity to say “thank you” to a group of remarkable individuals. The participant with the most Thank You votes receives a pay-it-forward donation of $10,000 to the nonprofit of their choice.

View Bill’s official Legend page, including video and photos from her presentation ceremony. 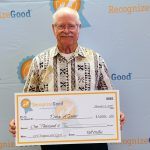 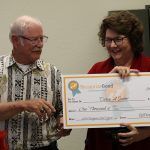 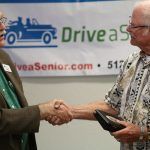